You are here: Home / Faith & Encouragement / 3 Things to Help Us Trust Despite the Storm

Storms awe me, but they also scare me. I’d like to be like Mr. King, our across-the-dirt-road neighbor when I was a kid. He would sit out on the front porch and watch lightening storms. I thought the man was crazy, but now I wish I had his assurance and peace because the storm, though it scares me, can be beautiful. What I understand now is that Mr. King had trust despite the storm.

In our small group recently, we studied the passage in Matthew (14:22-33) where Jesus walked on water. You probably know the story, but in case you don’t, here’s the short version. Jesus had just fed the 5,000 men, besides women and children. After that, He sent the disciples away on a boat to cross the sea while he went to pray. The waves battered the boat and the winds were contrary. Jesus watched the storm unfold from a distance, and then He went to them, walking on water!

They didn’t recognize Him and thought He was a ghost.They were scared until He called to them telling them it was He.  Then Peter, one of the twelve disciples, said, “If it’s you, then tell me to come to you.” So, Jesus did. Peter stepped out of the boat and he, too, walked on water.  It wasn’t until he began to doubt that he began to sink. Jesus reached out to Peter to save him but admonished him about his lack of faith. “You of little faith, why did you doubt?” (Matthew 14:31)

In case you were wondering, I most likely would have been as far to the middle of the boat as possible!  But Peter, once he knew it was Jesus, wanted to go to Him. And when Jesus said, “Come,” Peter stepped out of the safety of the boat and into the storm without hesitation.

Trusting despite the storm takes focus. Peter was focused on Jesus and nothing else, at least for a few moments.  When you have been wanting to do something and wanting to hear Jesus say, “come,” you excitedly (though scared and cautious) step out.  Because I finally hear Jesus say, “Come,” I’m guilty of thinking it’s all going to be smooth sailing.

Related Post:Three Lies About Your Calling & The Truth You Need

Funny thing, though…. In the story in Matthew, Jesus didn’t calm the winds and waves at that point.  He allowed them to batter Peter without the safety of the boat. Peter failed the test. He stepped out on faith, getting out of the boat. But when he got out there and all the turmoil was going on around him, he lost focus and began to doubt.

I am so much like Peter. When life’s storms surround me, even after I have heard the command to come, I freak out–doubting, blaming God for letting the waves overtake me.  I begin to slip beneath them, and I cry out for Jesus to help me.  He’s there ready to reach out, but at the same time, he admonishes me: Oh you of little faith, why did you doubt? 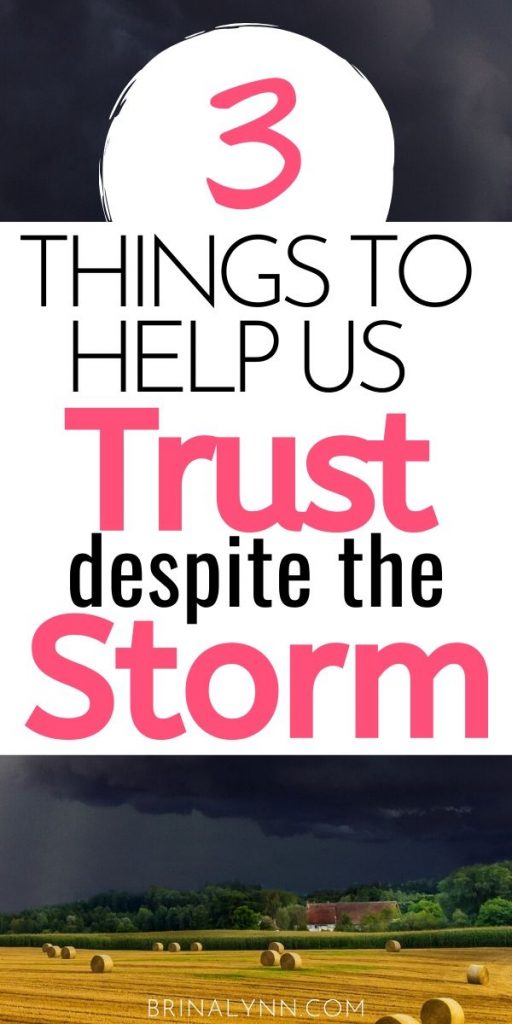 How do we trust despite the storm?

So, how do we trust despite the crazy, raging storm all around us?

We have to be like Peter and have our focus on the One who created the storm and the sea. It’s easy to trust at first…until the realness of the storm is against you. It is then that our eyes have to stay on Jesus and not on the waves battering us on all sides. We have to choose not to believe the lies we hear, and instead stay focused on the Truth and His Word.

Even when we cannot see. That’s when it matters most–when the storm is so bad that we can barely see our hand in front of us. Jesus is there on the water with us, waiting to catch us, testing us to believe He’s there and to trust His call.

Remember Who called you. If you called yourself out onto the waves, you probably have reason to be afraid, but if the Master of the winds and waves called you, trust Him. Remember when He called, how He called, where you were, what you were doing. Maybe you were on a boat or at work or [like me] in a graveyard.

Related Post: What to Do When You Don’t Know What to Do

When the sea begins to overtake me, I lose my focus, begin to doubt, and I forget His promises and His call.

What about you?  Do you find yourself slipping beneath the waves, too? When you find yourself in that place, focus on Jesus, believe that He’s there even when you can’t see Him (and call out to him), and remember that He did, in fact, call you!

If you struggle with trusting like I do oftentimes, I urge you to check out the book Trust Without Borders by Arabah Joy. In my current “private” storm (the one raging within myself that most people don’t see), this book has really been an encouragement and a light as I fight to trust despite the wind and waves.