You are here: Home / Faith & Encouragement / Are You a Rule follower or Rule breaker?
100 shares

Today, I wanted to just sit and chat with you. I hope you have your cuppa joe handy so that we can sip our coffee (or tea) and get to know one another better! I have a question I wanted to ask. Are you a rule follower or a rule breaker?

If you know me in real life, you know my answer! I am a rule follower–almost to a fault sometimes. If someone tells me the way a thing should be done, I’m always scared to go out on a limb and try it another way. Seriously. 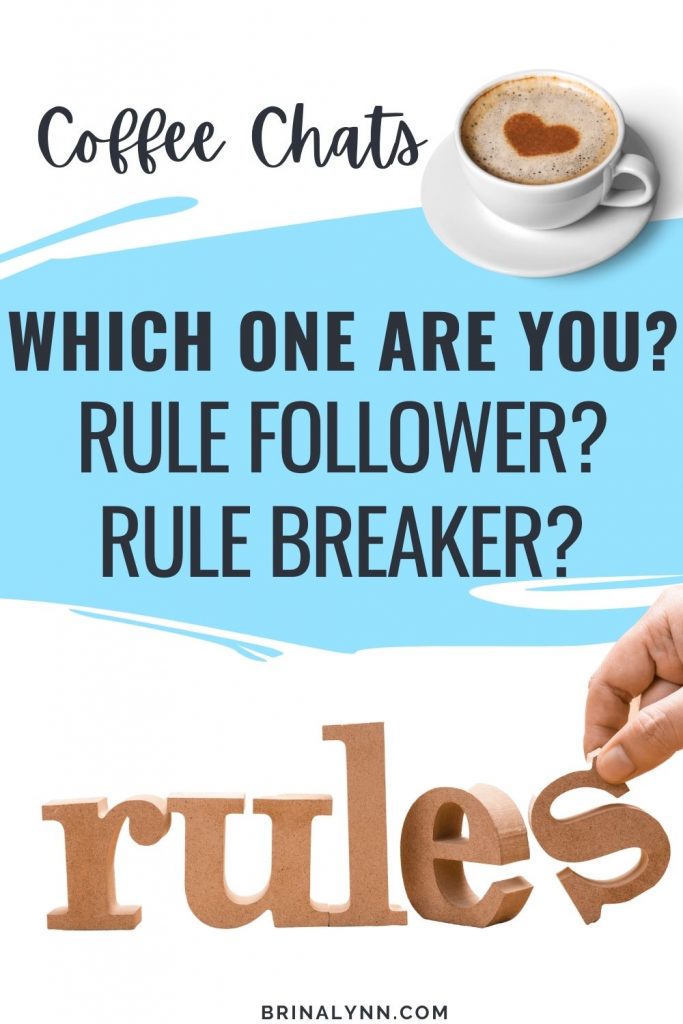 Back in December, we made Jesse Tree ornaments as a group of ladies at the church. My instructions specifically stated one way to do the craft. My table neighbor said, “Hey! I think if you do the ribbon this way it’ll not only look better, but be a bit easier.” Ya’ll, I struggled with that! I didn’t want to hurt our leader’s feelings by not doing it her way, but the other way did make sense. Ultimately, I did take some liberty with the craft and it was fine. But, in my heart of hearts, I follow the rules–I want to–so it bothered me to change it up even a little bit.

I think it comes from wanting to please others and fear of getting in trouble. My mom was a true Southern woman. She meant what she said, and she said what she meant. You didn’t have to wonder. And she didn’t play games. I knew what the consequences were for disobedience and rule breaking. They were not consequences I cared to endure. My daddy? I was afraid to disappoint him or to cross him. All he had to do was give me “that look”–you know the one.

So I minded my p’s and q’s as best as I could. To be transparent, I did let my parents and lots of others around me down at times. I was not a perfect kid, but I wanted people to think I was. So, I minded my manners, obeyed my elders, and followed the rules.

The day I learned the cost of cheating

Any time I consider doing what I’m not supposed to do, I go back to a day I remember very clearly. I was “running” cross country. I quote running because I rarely did more than jog, and mostly walked, but it was required for varsity basketball players to “run” cross country.

That was back in the day of long dirt roads and hopping into the back of pick-up trucks, which is exactly what I did with at least a half a dozen teammates. Only, moments after hopping in, my conscience got hold of me, and I regretted the decision. However, our nice driver, whom I did not know, would not stop to let me out. In that moment I panicked and decided that I would make right my decision to cheat, and I chose to jump out of the moving truck onto the dirt road below.

Admittedly, the truck was not going very fast, as it was on a dirt road, but the impact was still pretty shocking. I can honestly say, I’ve never seen that much blood come from a nose in my life. Oh, I was fine, but my nose took an awful hit, and my pride? It tanked. Not only had my peers, many of them friends, watched me cheat and get in the truck, but they also watched me make a nasty jump resulting in the bloodiest nose I have ever witnessed. The soiled shirt I had to wear to the finish line, where I met my coach, was shame around my neck. I’m quite certain it went in the trash before my parents got home that day.

To this day, I cringe when I think of that day on the cross country trail, all these years later. God has a sense of humor, though. We live only about two miles down the once dirt road where I learned a very valuable lesson. I can still remember the spot in the road. The shame I felt. The guilt for cheating. I feel it every time I pass that way.

I’ve never really lived it down. Every now and then, one of my old teammates will say, “Hey, Bean, remember that time you jumped out of that truck on the cross country trail?”

All I can do is chuckle and hang my head. I’m certain I blush just a tad even 22 years later. What I learned was that rules do protect us. And cheating? Well, it’s at some point going to catch up to you in some way. Ultimately, it’s just not worth it. I’d rather plug along, honestly working and battling my way through the trenches than to cut corners so that I can coast. Coasting sounds good; I even dream about it sometimes, but I know the cost of coasting when you got there by cheating.

There are most definitely lessons in the trenches; ones that I need to learn. I know that I am who I am today in part because that my bloody nose experience; I know that without experiences, life just isn’t the same.

I guess that means I’m going to follow the rules, jog the trail, plug along, knowing that in the end, I will finish.

***Please don’t confuse rule breaking with efficiency. They are definitely not the same thing. Efficiency is me modifying that ribbon to make it easier to work with; cheating is me hopping into the back of a truck to coast to the finish line. As moms, we all need to be efficient, always figuring out ways to streamline our tasks. Remember: finding a better way isn’t breaking the rules.***

So, which are you? Rule follower or rule breaker?

Previous Post: « Best Budgeting Advice Ever | Planning for Irregularly Occurring Expenses
Next Post: Everything You Want To Know About Large Families »

Remove far from me falsehood and lying; give me neither poverty nor riches; feed me with the food that is needful for me.
Proverbs 30:8
We use cookies on our website to give you the most relevant experience by remembering your preferences and repeat visits. By clicking “Accept All”, you consent to the use of ALL the cookies. However, you may visit "Cookie Settings" to provide a controlled consent.
Cookie SettingsAccept All
Manage consent

This website uses cookies to improve your experience while you navigate through the website. Out of these, the cookies that are categorized as necessary are stored on your browser as they are essential for the working of basic functionalities of the website. We also use third-party cookies that help us analyze and understand how you use this website. These cookies will be stored in your browser only with your consent. You also have the option to opt-out of these cookies. But opting out of some of these cookies may affect your browsing experience.
Necessary Always Enabled
Necessary cookies are absolutely essential for the website to function properly. These cookies ensure basic functionalities and security features of the website, anonymously.
Functional
Functional cookies help to perform certain functionalities like sharing the content of the website on social media platforms, collect feedbacks, and other third-party features.
Performance
Performance cookies are used to understand and analyze the key performance indexes of the website which helps in delivering a better user experience for the visitors.
Analytics
Analytical cookies are used to understand how visitors interact with the website. These cookies help provide information on metrics the number of visitors, bounce rate, traffic source, etc.
Advertisement
Advertisement cookies are used to provide visitors with relevant ads and marketing campaigns. These cookies track visitors across websites and collect information to provide customized ads.
Others
Other uncategorized cookies are those that are being analyzed and have not been classified into a category as yet.
SAVE & ACCEPT